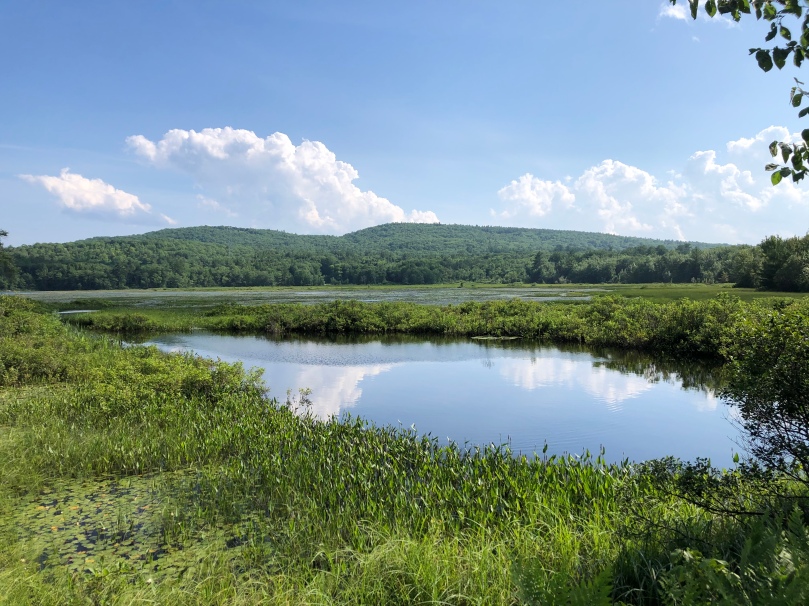 Driving on the dirt roads,
high above Moosehead Lake,
you might find feelings of
pleasure and comfort as the sun
bounces off the leaves and provides
random glimpses of the big lake,
far below, beckoning you to come again
to its shoreline.

Megan treated Gavin and I amazingly on Father’s Day weekend. This is one of the many photos we snapped. Gavin (3.5 years of age) now has his first fishing trip under his belt. And, apparently we will be on TV. An HGTV camera crew member was filming for their series called, Island Hunters, around the big lake when he spotted our little family and asked permission to film us while Gavin fished with his new blue fishing pole.

What a great weekend we had. I hope this little snap of sunshine helps to brighten your Monday.

ps, I know I have a lot of your posts to catch up on. Will do the best I can to do that!

The lake reflected the moon in shimmering splinters as the wind pushed waves inland and finally to his feet. The wind drove directly at the camp from the Northwest. He couldn’t smell the campfire, although he could hear the flickering of the flames just after one of the men shuffled the burning logs around. They were constantly doing this while complaining about how no one could keep a fire going.

That’s the thing about being at camp, he thought. We are in the middle of no where and the owner insisted that we use the metal fire bin with wildlife depicted on the side. They don’t work. The airflow is stifled toward the bottom. He had mentioned that they should drill holes at the bottom of the fire bin for better airflow and was scoffed at. It was always like this. Or, they would talk around him. He left the fire, and them, and brought a chair to the foot of the lake to watch the wind push the white caps around.

Only two men sat at the fire now. The rest had gone to their bunks. It was late but he didn’t want to be in the bunkhouse. They toss and turn and snore while he lays quietly and doesn’t sleep. No. He’d rather sit here and let a moose walk up to him. The wind felt nice on his face. It wasn’t cold. It felt like a comfortably blanket that moves. The waves licking at the shore landed with a calming rhythm. If he could talk with the lake he would have enough company to last the night. Sometimes he could catch a few words of the conversation at the camp fire, but he didn’t want to know what they were talking about so he tried not to listen. He could see the outline of the mountain range on the far side of the lake. He thought about the Indians who knew those mountains and traversed them hundreds of years ago. They truly knew the mountains and lakes and the game. They were not there to own it, but to be with it. He wanted to talk with them and sit at their camp fires even if he didn’t understand a word they said.

He closed his eyes and inhaled deeply bringing in all of the musty smells of the lake. He wondered if he’d be able to smell a moose or a bear if it were close enough. While his eyes were closed and the wind brushed passed his cheeks he heard a clopping sound coming from the shoreline just north of him. He opened his eyes to see a darkened image of a large moose feeding. The moose raised its long legs out of the water and dropped them back into the lake without taking its head out of the water. Just then he heard the harsh hissing sound of steam as the men were done with their night and putting the failed fire out for good. He didn’t bother calling to them. He liked seeing the moose alone. He liked that he could have this and they will know nothing about it. Even if he did tell them they wouldn’t believe him. They’d say a moose wouldn’t come this close to camp with a fire going. They’d tell him moose don’t feed at this time of night. Then they’d tell their stories about how they have seen moose and about how close they’ve gotten to them and him having seen a moose would have dissapeared all together.

The large head of the moose slowly rose from the water, tested the air, and stood motionless for a moment then again started to feed. He closed his eyes and replayed the motionless moose. He had what he needed and what he came for.

There was a constant wind blowing from the south. The wind drove itself into the mountain range on the opposite side of the lake. He had taken the canoe to the farthest southern corner of the lake. There, the canopy of evergreens block the wind. The water was smooth.

The lake was nice and cool. The native trout were active. He watched them rise, leaving small rings. There was only the sound of the wind reaching, and swiveling away from the soft branches of the evergreens.

Raising his arm, the fly line became active and arched beautifully through the air. He’d seen a riser just ten yards in front of the canoe. He landed the fly just inside the outer portion of the ring.

Immediately his line became taught, his rod bent in half. He could feel every movement the large trout made. It fought severely. The fly snapped back into the air, and flew toward the canoe. The fish was gone.

He liked that a cigar lit hard after having been smoked and let to die out. He needed to cover the cigar from the wind and point it down to warm it sufficiently before trying to smoke it. If the smoke from the cigar didn’t travel fully through, he’d need to start over. After the third try his thumb would be slightly burned. If the wind was too heavy the cigar couldn’t be lit. He’d be left with a smoldering cigar and burned thumb. But, if the cigar was lit, he would enjoy the feeling of the smoke. He’d watch the swirls leave his mouth and range wildly around his face. No one arrangement of smoke was the same. Thinking about this made him ache with warmth.

(photo taken by me while fishing.)

Outside was damp and the sun wasn’t yet up. He could hear a few of the men walking toward the lake, heading out early. He listened as the leaves were crushed underfoot. The smell of butter melting on the iron skillet filled him with a moment of joy because the eggs were now blistering in places and the slices of steak were browning. He used his knife to drop more butter in and placed muffins, face down, in between the eggs and steak. Using a towel, he gripped the skillet handle and tipped it first toward him and then away to let the grease mix with the butter and drain under the muffins and collect on the sides of them in the places where the grease and butter could not go underneath.

Soon he would wake the boy and they would eat. And then they would be the ones crushing leaves underfoot.

It’s crisp with crunching leaves then humid with summer nights.  Its snow is deep and winters long with flowers growing wild in the spring.  It hides itself with seasons.  New England.  -M. Taggart

copyright M. Taggart.  Feel free to share this article by forwarding the link.